This morning I awoke from a very strange dream. It is still vivid enough with me that I thought I’d add it here. 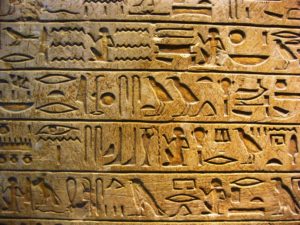 I was with a group of police officers tracking down a killer. Even though I do not believe I was a policeman, I was still with them. I believe I either knew the suspect, or had some other attachment to what was going on. Either way it was part of the dream.

We had chased the killer for months. We finally tracked him down to some abandoned mine somewhere in the middle of nowhere. (Why is it always in the middle of nowhere?) Anyway, we search through this mine and find him in this cavern with his latest victim bound and him working on some kind of machinery. The machinery surrounds some box about the size of a footlocker upon which is carved ancient hieroglyphs.

After we subdue the killer, which takes quite some time, and almost gets a half dozen or more people killed in the process. I turn to the officers and say the following:

Let me tell you a story.

In ancient days, somewhere in the desert, they say a box fell from the heavens. Scrolled upon the box were glyphs and writings of archaic design. This box was discovered by three brothers. The brothers loved each other very much, but upon finding the box they turned on each other and only one survived to claim the box as his own.

The final brother emerged from the desert many years later, greatly changed from the man he had been. There was a wild look in his eyes, he was much leaner then had been, but there was a strength in him few men could match. He gathered men, hard, evil men, and built a city. The city grew and grew. As it grew though, it did not prosper, not as you would call prosperity, anyway. The lands around the city for many leagues were wracked with plague. The city itself was as a city of the dead. Finally the sands themselves arose and swallowed the city. The plagues ceased and all returned to normal.

Then some two thousand years or so later, so history states, archeologists find the lost city and begin digging. After years of searching, they find the central chamber of the city capitol building, and inside find the very same box as described. As they proceed to open the vaults the workers begin to sicken and die. Finally they are able to remove the box and place it on a train for transport. The train is sent on its way. At this time there are only a handful of archeologists left, they accompany the train to its final destination.

And, yet, here we find a madman, in the throes of his madness, in possession of a box fitting the very same description and you want to take it in as evidence. I say destroy the thing, if you can, if not dispose of it where no one will ever find it again. Encase it in a block of steel with sufficient warning on it to deter even the most determined person from ever opening it again, and lock it away from mankind forever.

At which point I awoke, and here I am relating the dream to you. You can decide whether or not my dreams are noteworthy, or if I simply watched too much Indiana Jones or what.

Thank you for reading.

This site uses Akismet to reduce spam. Learn how your comment data is processed.