It has been a while since I updated anything to the site, and until now nothing that was true prose. The following is a small piece of imagery that has crawled around in my head for many, many years. Hopefully it will paint the same picture for you that it has for me. 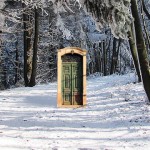 Snow drops from overburdened tree limbs. A cardinal flutters from limb to limb, basking in the warm sunlight. A group of rabbits forage for food in the tufts of dead grass emerging from melting snow banks. Stillness settles over the glade. When without thought the creatures dive for cover, not realizing what is happening but knowing in some instinctive part of their brain that something is amiss.

A light manifests itself in mid air to one side of the glade. It expands to a horizontal line in the air. It expands upward and downward in equal lengths until reaching an apex of a dozen feet or so. Leaving a doorway to nothingness. Well, perhaps not nothingness, all doorways lead somewhere, and this one is no exception.

Soon the ground begins to shake. The trees in the glade soon shake off their covering of snow, by no choice of their own. Shapes appear in the distance through the doorway. Only seen as an increasing of the darkness. Soon a horseman emerges from the opening. A dark foreboding powerful man, if man is what it could be called. Man fits only as the general shape of the things armor, the instinctive feeling emanating from the creature is definitely an inhuman sense of wrongness. It rides astride a powerfully built destrier, well over 20 hands high, though no horse ever had eyes as dead.

Close on the heels of the first, pour a multitude of others equal in stature and dread. For many long minutes the horde rides forth. Steam rises from each hoof as it sits down on the icy earth. Not a sound is made, an absence of sound emanates forth. As if sound itself is afraid to make an appearance so long as this column of riders issue forth.

As the last horsemen disappear in the distance, sound returns to the glade in the form of silence. Trampled earth, drifts of snow, and a lone empty Doorway are left in its wake.

This site uses Akismet to reduce spam. Learn how your comment data is processed.